Gender-based violence remains a significant yet preventable barrier to equality. Canada will only reach its full potential when everyone has the opportunity to thrive, no matter who they are or where they come from. To achieve this, we need to work together to prevent gender-based violence.”

The National Day of Remembrance and Action on Violence Against Women

The National Day of Remembrance and Action on Violence Against Women is annually on December 6 to honour the thirteen students and one instructor murdered in 1989 at l’École Polytechnique de Montréal because they were women. This day of remembrance falls squarely in the middle of the international 16 Days of Activism Against Gender-Based Violence Campaign and the UN’s International Day for the Elimination of Violence Against Women and International Human Rights Day. Many schools will launch awareness campaigns and host events to spread awareness on gender-based violence (GBV). 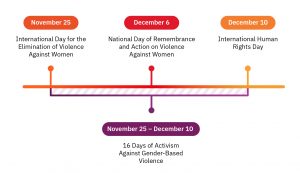 In the age of international conversations like #MeToo, Women’s Marches, and the National Inquiry on Missing and Murdered Indigenous Women and Girls (MMIWG), gender-based violence is on everybody’s radar. As educators, we understand the importance of addressing such pervasive and hard-hitting issues. The question is, where and how do we begin? This blog post explores ways to bring GBV topics into our classrooms respectfully, educationally, and effectively.

Read my suggestions for easing into conversations about GBV with your learners using three familiar topics as entry points:

The Government of Canada defines gender-based violence as “violence that is committed against someone based on their gender identity, gender expression or perceived gender” (Status of Women of Canada, GBV Strategy). In 2017, the government officially announced its response to gender-based violence. It’s Time: Canada’s strategy to prevent and address Gender-Based Violence is based on three pillars: 1) prevention, 2) support for survivors and their families, and 3) promoting responsive legal and justice systems. The strategy also acknowledges that GBV disproportionately affects Indigenous women, girls, LGBTQ2+ and gender diverse individuals.

Everyone, including boys and men, must be part of the solution to end gender-based violence. All people living in Canada deserve the same opportunity to thrive and succeed, no matter their sex, gender, sexual orientation, or ethnic background.”

– The Honourable Maryam Monsef, Minister of Status of Women

It is important to begin talking about healthy relationships of all kinds with learners at a young age. According to Loveisrespect.org, violent behaviour patterns, including against romantic and sexual partners, usually appear between 12 and 18. Once established, they are difficult to break. Educating young people about respectful, loving relationships early on in ways that resonate with them is very important. Sometimes, it’s even simpler than we might think.

At the heart of the #MeToo movement is the notion of consent. Teaching consent helps combat sexual violence on a mass scale. Children must know consent is a necessary step toward any and every physical or sexual encounter from an early age.

Sex Ed curricula taught many of us, myself included, to say “No,” but not how. Neither did the curricula teach us how to say “Yes.” Many of us never had Sex Ed due to insufficient or non-existent programs. To this day, Sex Ed remains a highly debated topic across Canada. For all these reasons, teaching about consent can be intimidating! Fortunately, the topic of consent is anything but exclusive to Sex Ed, and there are resources available to help.

According to the Harvard Graduate School of Education, we can teach consent to very young children, even toddlers and babies. This is because we can explore consent in the simplest and most complex terms. The article “Consent at Every Age: Strategies for educators on how to talk to your students about respecting one another’s boundaries – from preschool to high school” includes more detailed information and helpful resources. One resource that I have returned to time and again and even shared with colleagues is this video called Tea and Consent by animator Emmeline May. Police departments, educators, and community theatre troupes have drawn upon the principle of consent as tea. If you like it, you might do the same!

Violence against Indigenous women and girls does not stem from one isolated event. Sadly, it is the daily reality of far too many human beings, many of whom are among this country’s most vulnerable. Today, we have the opportunity to highlight the extraordinary resilience of Indigenous women and girls, who remain dedicated to advocating for their rights and charting a path forward – a path we must all take together.”

We can no longer ignore the topic of MMIWG. To open up the conversation in your classroom, we recommend using Their Voices Will Guide Us, a student and youth engagement guide created by the National Inquiry. This guide is based on Chief Commissioner Marion Buller’s message of hope.

By taking collective responsibility for safety, and by educating Canadians about the systemic causes of violence against Indigenous women and girls, we can effect real change.”

We hope that these resources help you address these important topics with your class. These topics are not easy to address, but having the right support materials and resources can make it easier.

Do you have other resources that you’ve used to address GBV, #MeToo, and MMIWG with your learners? Reach out and let us know so we can share them.

Rachel Thorne
Rachel has spent the last 10 years teaching in Eeyou Istchee, Quebec, the Sahtu region of the Northwest Territories and Vancouver, British Columbia. Her passion lies in unsettling popular notions of what it means to teach and learn through Indigenous pedagogies and ways of knowing, to provide education that is enriching and effective for all learners. In her spare time, she likes watching live music, creating and consuming art, and cuddling with her dog.