Lest We Forget is a phrase commonly associated with Remembrance Day observations. It has particular resonance as the 100th anniversary of Armistice Day approaches. The phrase has biblical origins, but its modern connotation urges us to recognize and remember the sacrifices made by millions of men and women in foreign conflicts. In Canada, however, “Lest We Forget” seems to apply only to some Canadians who risked or lost their lives in defence of our country. Specifically, Canadian history largely omits the contributions of Indigenous Peoples who fought for the freedoms we enjoy. The government recently made efforts to rectify these omissions and honour the thousands of Indigenous volunteers who fought and died for Canada with National Indigenous Veterans Day.

In July 2018, the Governor General awarded an amateur historian in Quebec the Sovereign’s Medal for Volunteers. Yann Castelnot created one of the largest databases of Indigenous soldiers who served in the Canadian and U.S. militaries. Castelnot, originally from France, spent two decades compiling the names of more than 150,000 Indigenous soldiers who fought for their countries. His work brought the achievements of military heroes like Sgt. Frank Narcisse Jérome, a Mi’kmaw soldier from Quebec who fought at Vimy Ridge, Hill 70, and Passchendaele to light. Jérome is one of only 39 Canadians to receive the Military Medal three times during a conflict. “[These heroes] must be put back on the altar of heroes alongside all the others…it’s not just a photo or a name, but a story to tell,” Castelnot said.

Last year, Learning Bird worked with St. Theresa Point Middle School to create social studies resources about the contributions of First Nations people in Canada’s war efforts in the twentieth century. One of the video resources centres on Indigenous heroes in WWI. It details the experiences of veterans like Charlotte Edith Anderson Monture. Monture was a member of Six Nations of the Grand River and a gifted student. She aspired to become a nurse. However, the Indian Act barred Indigenous people from higher education. Instead, she attended nursing school in New York and became Canada’s first Indigenous registered nurse in 1914. She then joined the U.S. military and served in a military hospital in France from 1917-18. Charlotte subsequently became the first Indigenous woman to vote in Canada.

The resource kit also highlights the service of Mike Mountain Horse from Kainai First Nation. Mike went to St. Paul’s Anglican Residential School on reserve at age six. He later worked as a scout for the North-West Mounted Police. Mountain Horse’s father fought with the Blood Tribe during the Battle of Belly River. His brother served with the 23rd Alberta Rangers in World War One, eventually dying of injuries he suffered during the Second Battle of Ypres. Mike Mountain Horse and his brother Joe enlisted in the Canadian Expeditionary Force, fighting in France. Upon his return to Canada, he became a journalist. He wrote a manuscript detailing Kainai culture and history called “My People the Bloods.”

Another Indigenous soldier featured in the resource kit is Charles “Checker” Tomkins, who played a key role in WWII. Charles was a fluent Cree speaker from a small village in Northern Alberta. He joined the Canadian military in 1939. The Canadian High Command sent him to London, England in 1940, and summoned him to a secret meeting. There, they tested Charles’ fluency in Cree. Canadian High Command told Charles he would serve as a “code talker,” a translator of secret Allied communications. Command assigned Charles to the U.S. 8th Air Force and the 9th Bomber Command in England, translating various messages like troop movement orders or enemy supply lines. A 2016 documentary on Charles’ service, Cree Code Talker, notes that many credit this operation with helping win the war. The film also points out that neither the U.S. nor Canadian governments have recognized code talkers’ role in WWII.

November 8th marks National Indigenous Veterans Day. It was first observed by Winnipeg’s city council to commemorate Indigenous contributions to Canada’s war efforts. The Canadian government still does not consider it a national day of observance. However, educators can ensure that learners know the extraordinary contributions and significant legacies of thousands of Indigenous men and women. We hope to work with other communities to create content that honours and celebrates Indigenous Peoples’ service to Canada in the coming years.

Kristen Nelson
Kristen has a background in comparative history and ESL teaching. Curiosity has led her to many different parts of the world, and drives her interest in diverse cultures, histories, and peoples. She can be found singing, cycling or learning something new in her spare time. 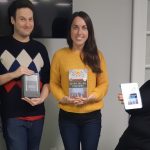