Last month, Rebecca and Mackenzie from the Learning Bird team visited God’s Lake Narrows in Manitoba. This was Rebecca’s second trip to the community. During her time onsite, she met with educators to walk them through accessing resources that support their teaching. At the same time, Mackenzie filmed in and around the community to gather footage for the school’s custom content.

The team had the opportunity to film ice fishing for one of the new resource kits we are making together. They drove by snowmobile for thirty minutes over the snow and ice until they finally reached the net. After getting set up and removing the ice covering the hole, the net was pulled from the lake a few feet at a time to remove the fish before they froze at the surface. The team was busy documenting the process, but they got a chance to pull the net. It was definitely harder than it looked!

This was the first time either Mackenzie or Rebecca had the chance to ice fish. They were both delightfully surprised by the processes of net setting. 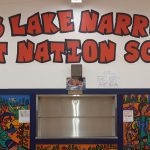